What is Buster Douglas’ Net Worth?

Buster Douglas is a retired American boxer who was at one point the world heavyweight champion. Buster Douglas has a net worth of $15 million.

Buster Douglas is best known as the fighter who scored an earth-shattering upset when he knocked out the-then undefeated Mike Tyson on February 11, 1990 in Tokyo, Japan. At the time, Tyson was considered the best boxer in the world and one of the most feared heavyweight champions in history.

Tyson was such an overwhelming favorite that only one casino in Vegas made odds on the fight. The Mirage had Douglas as a 42 to 1 underdog for the fight, making his victory, in commentator Reg Gutteridge’s words, “…the biggest upset in boxing history, bar none.”

Douglas held the title for eight months and two weeks. On October 25, 1990 Buster was defeated by a 28-year-old, 6-foot-2-inch, 208-pound Evander Holyfield via a third-round KO (knock out) in Buster Douglas’ only title defense.

Buster earned earned approximately $3 million when he defeated Tyson. He then earned $24.1 million, the largest purse ever up to that point, to fight Evander Holyfield. After adjusting for inflation, $24.1 million is equal to $43.5 million today. Holyfield earned $8 million. In total between these two fights alone, Buster earned $27.1 million, which is the same as around $56 million in today’s dollars.

Buster Douglas was born as James Douglas in 1960. His father was professional boxer William “Dynamite” Douglas, and he was raised in the predominantly black Linden neighborhood of Columbus, Ohio. Douglas was first introduced to boxing by his father, who ran a gym at the Blackburn Recreation Center. As a teen, Douglas went to Linden McKinley High School, where he played both football and basketball. In 1977, he led his school team to a Class AAA state championship. After graduating, Douglas played basketball for the Coffeyville Community College Red Ravens in Coffeyville, Kansas. Afterward, he played for Sinclair Community College in Dayton, Ohio, and then went on a basketball scholarship to Mercyhurst University in Erie, Pennsylvania.

Douglas made his professional boxing debut in May of 1981, defeating Dan O’Malley in a four-round bout. He won his first five fights, but lost his sixth in a knockout by David Bey. Douglas went on to win his next six fights before drawing with Steffen Tangstad in October of 1982. Over the following two years, he beat mostly journeyman fighters, including Jesse Clark, whom he fought and knocked out a total of three times. Another major bout was against former heavyweight contender Randall “Tex” Cobb, whom he defeated by majority decision. In 1986, Douglas beat former champion Greg Page, helping him earn a shot at the International Boxing Federation championships. However, after starting well against Tony Tucker, he lost his steam and was stopped in the tenth round.

By the late 80s, Douglas had split with his trainer father over a series of disagreements. He went on to handpick another team and a new trainer. Douglas then won four consecutive fights. In 1989, he beat Trevor Berbick by unanimous decision, and shortly after, won another unanimous decision in a victory of future heavyweight champion Oliver McCall. 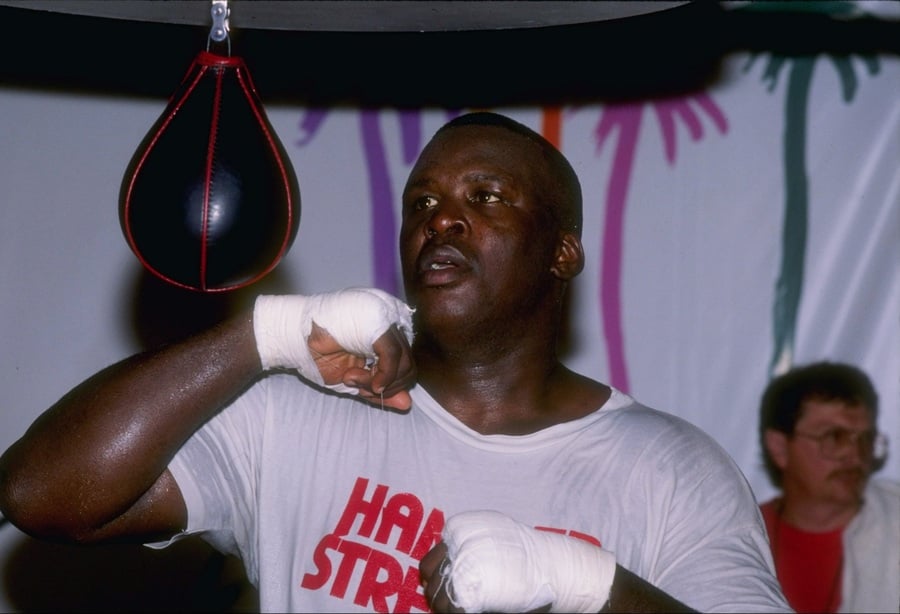 In February of 1990, Buster Douglas was scheduled to fight undisputed heavyweight champion Mike Tyson at the Tokyo Dome in Tokyo. Almost all pundits expected the bout to result in an easy win for Tyson; in fact, the odds were so in the champion’s favor that almost every Las Vegas betting parlor refused to hold odds for the fight. To the surprise of nearly everyone watching, Douglas was the one who ended up dominating the fight from beginning to end. By the fifth round, Douglas’ numerous right jabs had swelled Tyson’s left eye. Because Tyson’s cornermen had not anticipated such a challenge, they came without an endswell or an ice pack, and so had to use tap water in a latex glove to use on Tyson’s eye.

Tyson’s eye had swollen nearly entirely shut by the end of the fight. However, in an intense eighth round, he managed a right uppercut to knock Douglas down. He continued to battle valiantly in the ninth round, but was on the receiving end of a major attack by Douglas. In the tenth round, Douglas dominated by landing a massive uppercut on his opponent. He followed this with a four-punch combination to the head, knocking Tyson down for the first time in his professional career. With Tyson unable to survive the referee’s count, Douglas was named the new undisputed world heavyweight champion.

Declining a rematch against Tyson, who had launched a protest following his loss, Douglas chose to make his first defense of his title against Evander Holyfield. In their bout in October of 1990, Douglas came out fairly weak, and was dominated by Holyfield over the first two rounds. When Douglas attempted an uppercut, Holyfield dodged it and knocked him down flat. Just after this defeat, Douglas retired from boxing.

Receiving around $24 million for the fight against Holyfield, Douglas stayed mostly out of the spotlight in the years after his retirement. During this time, he gained a great deal of weight and nearly died from a diabetic coma. To correct his course, Douglas made a return to boxing, and won his first six fights in a row. He was scheduled to fight light-heavyweight champion Roy Jones Jr. in the late 90s, but this fight fell through. In 1998, Douglas fought heavyweight contender Lou Savarese, who knocked him out in the first round. He went on to fight in two more bouts, both of which he won. Douglas then retired for the final time in 1999.

Douglas has appeared in a variety of media outside of his boxing career. On television, he made a guest appearance on the action crime series “Street Justice” in the 90s. Meanwhile, he made his feature film debut in the science-fiction comedy “Pluto’s Plight.” In early 1990, Douglas served as a guest referee on WWF’s The Main Event III, a position originally intended to be filled by Mike Tyson.

In 1986, Douglas married his wife Bertha, with whom he had two children. Four years later, Douglas filed for divorce, citing incompatibility and a gross neglect of duty.

First He Signed A $125 Million Contract, And Now Dustin Johnson Has Made Even More Insane Money After Just Five LIV Golf Events

The Ten Highest-Paid Non-Quarterbacks In The NFL

First He Signed A $125 Million Contract, And Now Dustin Johnson Has Made Even More Insane Money After Just Five LIV Golf Events

The Ten Highest-Paid Non-Quarterbacks In The NFL